Lines in the Road 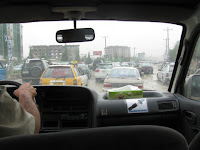 Recently I was taking a trip into the city center to do some shopping. After going on some very bumpy, dirt back roads, we came out on a nice highway that was three maybe four lanes. I am not really sure if it was three or four because sometimes there were three lanes of cars and sometimes it was four. Why? There were no painted lines dividing the lanes. Even then I am not sure that lines would help. Drivers here seem to use their horns alot and the rules are unclear. Each driver does what it best for him and what doesn't get him hit by another car. In Judges, they weren't driving cars but a phrase is repeated many times. Each man did what was right in his own eyes. We live in an age where some people live by the motto "If it feels good do it." Sometimes it feels like there are no lines in the road. As a parent, it is important for me to have some lines in the road for both me and my children. I am thankful that God provides that in His word and through the guiding of His Holy Spirit.

Dear God, Help me to see clearly the lines you have set for me and my family. Thank you for your guidance. Be with us as we live in a world where sometimes there are no lines in the road. Amen
Posted by TJ