Every Coin Has Two Sides 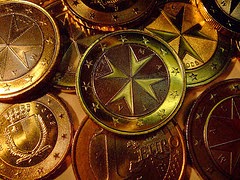 (from Flikr: Martin Fisch)
In our travels, we have accumulated all sorts of coins.  I am not even sure where some of the coins are from.  One thing each coin has in common is that they all have two sides, and each side is different.  Usually one side indicates how much the coin is worth while the other side might have a picture or symbol unique to that country.  If it is a coin from your country of origin, most people know what the coin is by just looking at one side or even by the size of the coin.

Just like coins, each story has two sides (and with stories sometimes more than two sides).   Each side is different but both represent the same story.  Often in my life, I only see one side.  I make a judgement based on the side I see, and I jump in.  I say or do something that reveals my ignorance and often end up putting my foot in my mouth.   For example, I will launch into a lecture with my son over something I think he has done wrong only to find out I was wrong.  There was another side to the story.  I misjudged.  It was an innocent misunderstanding.  With my teenagers,  I am learning to be more cautious.  I see an area of concern that needs to be addressed but instead of jumping to conclusions, I need to ask some questions and listen to their side before I make a judgement.  Maybe this why James reminds us to be quick to listen, slow to speak and slow to become angry.  When I am quick to listen, slow to speak and slow to become angry, it gives me time to see the other side of the story.

If we looked at both sides of the story, we could avoid a lot of disagreements and misunderstandings. Has anyone ever told you a story that involved a friend of yours that wasn't very flattering to your friend?  Did it affect how you felt about that friend?  What if you found out later that there was more to the story?  Each person saw and felt something different.  Maybe a friend was really short with you but then you later found out that your friend was going through a rough time in her marriage.  Or maybe a friend is distant with you, and it makes you feel like your friend doesn't like you anymore?  But maybe your friend was distant because he had a bad day at work that day.  Things aren't always as they seem at first.

When I was little, my mom always told me to stop, look, and listen before crossing the street.  In life, I am trying to do the same before coming to a judgement.  I need to stop, look and listen.